She stumbles slowly to the computer, wearing the FSM pendant her sister-in-law got her...

It's been busy 'round here. Well, I say busy, but we've been a bunch of slackers. Casey's back to work as of yesterday, Lily is over at her abuelita's house, Jackson is napping and I've got a load of dishes in the dishwasher and a load of laundry in both the washer and the dryer. Wait, I'm not slacking... Although, I still have yet to discover what that weird smell in my kitchen is. I've looked all over for it and it's just not allowing itself to be found. I think I may boil some cinnamon or something because I can't figure it out! My brain hurts from thinking too much about it.

We are currently hosting Matt and Ben in from Seattle. I am glad my sweet baboo and his sweet baboo are crashing with us. It's nice to see them and it's nice to hang out and play Rock Band with 'em. We got up this morning and played an hour before they had to jump in the shower and head off to meet Matt's family. This leaves me with doing nothing much but cleaning and hanging out with Jack. It has been a relatively quiet day. I'm enjoying it. First one I've had in a while.

Things are about to ramp up with our new production and come next tuesday I will more than likely be named Vice President of MAF, or Mid America Filmmakers. Woot. I'm looking forward to that challenge. I also have Tara Eary, a local filmmaker who's most recent flick got shown at DragonCon (and won a prize, but I don't remember what it was) approaching me to produce her latest endeavor. I haven't told her anything yet especially seeing as how I want an outline of her proposal and everything. At this point, I'm looking at each experience as a learning one and enjoying the fact that I have somewhat of a social life. Social life does Jess good. Makes me wear makeup and care about going out of the house in clothes other than pajamas. Woot for the social life!

Other than that, my IPod is still dead and I have reverted to old technology for my everyday musical needs (the speakers for the surround sound are better than the computer speakers, so I've been burning a lot of discs). I'm hoping Matt and Ben get home soon cuz well, I'm hungry and want to go eat. I may just end up eating more turkey, though... Yep, I'm official done with the turkey. It's just like... yuck now. I'm sure come Christmas next year I'll be all over the turkey again, though. Huzzah turkey!

I hope everyone had a fabulous Christmas! I'll try and post some pics when I actually get around to downloading them off the canon.
Posted by Jess at 3:38 PM No comments:

Things I will NEVER EVER do again two days before Christmas...

1) I will NEVER EVER travel to the mall 2 days before Christmas.

2) I will NEVER EVER travel to the mall to go to Build-a-Bear 2 days before Christmas.

3) I will NEVER EVER travel in the snow to the mall to go to Build-a-Bear 2 days before Christmas.

Oh, and you can make this list for the day before Christmas too. One more thing... I will never allow my husband to put off Christmas Shopping this late ever again, either. This is just RIDICULOUS!

Tomorrow: I make a turkey and bake cookies. Yes, everything is better with massive amounts of cookies.

We now rejoin our regularly scheduled game of Rock Band 2 (where I have created a new band named "I heart David Tennant").
Posted by Jess at 12:19 AM No comments:

Baby, it's F*&%ing FREEZING outside!

This morning when I logged onto weather.com, I discovered that it is no better than it was yesterday.  It is currently ZERO degrees outside with a windchill that brings the temperature down to a balmy -21 (the balmy part was sarcasm, by the way).
It's cold and yucky and there's another winter storm on the way on Tuesday.  They just showed a picture of the St. Joe River not to far north from us and it is filled with large chunks of ice and they've closed the bypass because it is "a solid chunk of ice."  There was even a snow plow that flipped over!  A SNOW PLOW!  This is what you call ridiculous.  It's like Mother Nature decided "Well, I've given you a break on the whole winter thing in the past couple of years, so I think I'll make up for it now."  Not fun.  Even my wind chimes have a thick coating of ice on them and are all frozen to the center part that creates the noise when the tubes hit them.
Today we will stay inside and bake cookies and just try and stay warm.  There are some fun Christmas movies on, so we'll probably watch some tv, too.   I think I'll start re-watching Battlestar Galactica, too, in order to prep myself for the impending season 4.5. (Season 4.0 is on my wishlist at Amazon if anyone is still looking for ideas...)
To everyone else out there: PLEASE STAY WARM TODAY!!
Posted by Jess at 8:53 AM No comments:

This morning I woke up slightly before Casey's alarm clock went off (around 5AM).  I kept hearing this tap-tap-tap on the window.  In my groggy state, I didn't put together that it was the ice storm that the weather men had been saying was heading our way (and was originally supposed to hit yesterday afternoon... they kinda screwed up there).  Casey woke up to and peaked out the window, grumbled and then turned the electric blanket on.
Around 6AM, as I was trying desperately to kick the manthing out of bed, even going so far as to lay on his side of the bed and say "I am not letting you get back into this bed. You need to get your clothes on and dig out your truck." I peaked outside and saw a very thin layer of snow covering my car and it was being covered with the ice that was falling from the sky.  I decided that a day like today would best be served mostly in bed.   Since Lily didn't have school today (and even if she did, it would have been canceled as were 90% of the schools in the area), I went and woke her up, asking if she wanted to come cuddle with me and that's how we spent the morning until Jackson woke up.
It was grand.  I didn't have to go anywhere, I got to hang out with the kids and there was absolutely no reason what so ever to go and carve my car out from under the what looks to be about an inch of ice.   Yep, and I think we'll do the same thing tomorrow.  Although, I think that there will probably be cookie making going on tomorrow.  And I have to start the turkey marinading.  Yep yep yep.
Now, if you'll excuse me, I'm going to go and download some more Christmas music.  Because you can never have too much Christmas Music.
Posted by Jess at 10:57 PM No comments:

My Ipod is dead. I tried plugging it into both computers and it's just not registering. It has been acting kinda funky for a while now, but now it is just dead... It is a sad sad day, especially since I use it every single day. Woe is me.
Posted by Jess at 9:08 AM No comments: 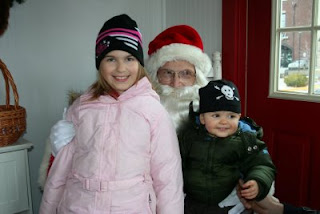 We had a wonderful and productive weekend at the Stone house. We finally got our Christmas tree up and got to see how Jackson would react to it. He takes every chance he can to go and "OOOOOH!!!" at it. We have to watch him carefully, though, because he likes to try and redecorate the tree. Sometimes he'll take the ornaments off and put them back on in another place on the tree and sometimes he'll just take off with them. His favorite are the large icicle looking things.

Midway getting the tree decorated, we discovered that two of our light strings were completely shot, so we decided to go get some more. Casey and I also decided that we would make a pit stop in downtown South Bend, see Santa Claus and have a cup of hot chocolate at the South Bend Chocolate Company.  Jackson did surprisingly well with Santa, and sat on his lap for ye olde photo op.  Lily was in the little hut before Casey and I even got up to it, already telling Santa what she wanted which, in case you're curious, Lily informed Santa that she wants a trampoline, a video camera, some Hannah Montana dolls and Joe Jonas for Christmas. Not a Joe Jonas doll, she wants the Joe Jonas. Let the boy craziness begin! Every time we saw something with the Jonas Brothers on it, she would do this over exaggerated swoon. Casey and I didn't know whether or not to be worried or laugh.  In any case, it turned out to be a wonderful afternoon.

This week looks like it's going to be a busy one. My dad is heading up today, I have shopping with my mom tomorrow and I have a few more Christmas things to get this week because Lily only has a few days of school left (Friday is her first day of "winter" break.) I'm looking forward to having a nice and relaxing holiday and I can't wait to see how Jackson does opening presents.
Posted by Jess at 8:01 AM No comments:

This weekend I have been fending off what I can only hope will be a less than horrible cold. It started out on Friday with a tickle in my throat. Saturday I woke up and it felt like my throat was on fire. After several of those tasty halls fruit breezer thingeys (I think that's what they are. They taste like the strawberry creme saver candies that I think hershey's makes.) and gargling way too much salt water (I think I gargled and spit out the Red Sea, seriously.) I finally decided to crack and get some tylenol sore throat.

My throat felt much better... Until I started sneezing. Then, all bets were off. Instead of ah-choo! It was OW-Choo! It's like the sneeze originated in my throat instead of in my chest. And to top it all off, each sneeze made my head spin! I decided to sit on the couch or lay in bed a good portion of the day until my mom called me to come and pick up Lily. We got Lily, we picked up a couple of movies and home we went. Oh, did I mention the fact that it snowed like 3 inches while we were doing this driving?

Sunday I have spent on the couch, with Jackson and Lily entertaining us. Jackson crashed for a nap around 3:00 and I dozed off on the couch a bit between flipping between The Lake House and Tin Man. All in all it's been a pretty uneventful weekend. I can't wait for this sore throat to go completely away. We're also waiting for the pizza we ordered to show up. Pizza on a cold, snowy day is nice. No cooking is nice, too, even though I had planned to make Christmas goodies today. So much for that plan. I would rather do it when I'm in a better mood and feeling better, though.

Hopefully sometime this week we'll put up the Christmas tree and I'll post photos.
Posted by Jess at 5:31 PM No comments: 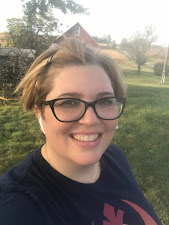